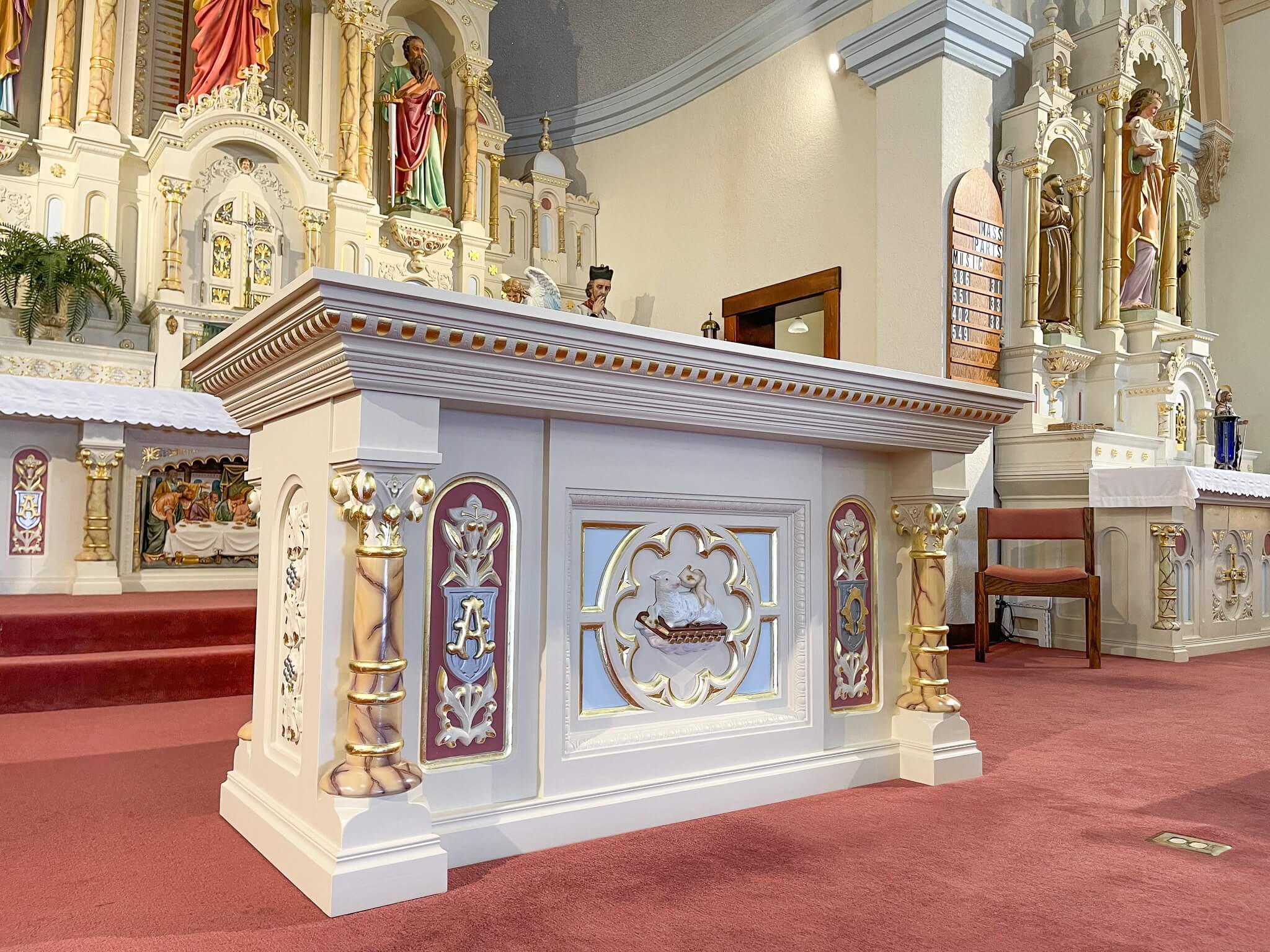 The story of the new altar at St. John Nepomucene Catholic Church in rural Rawlins County begins over 100 years ago. Many Bohemians moved into the area north of Immaculate Conception Church in the year 1886. Longing for a church of their own, they were lead by John Skolout and Fr. Placide Wolker in a project that would, when finished, represent the permanence of the churches back home. It would be a brick structure that would be a monument to their faith and reminder of their homeland. Fr. Placide helped John organize and raise funds for this new church. John donated five acres of his Burntwood Township land on which the church was built. The site chosen for the church is one of the most elevated spots in the area, and once the church was completed, it was visible from all parts of the parish district, and in some cases, many miles beyond.

The architect that drew up the plans for the church was Mr. C.A. Smith from Salina, Kansas. The building contractor, Mont J. Green, was from Manhattan, Kansas, and he employed Mr. C.H. Bixler to oversee a crew of six men. They lived in a contractor’s shack built on the same property as the church, and Mrs. Bixler, wife of the crew foreman, cooked for the men. Mary Skolout also helped feed the crew and often did their laundry by hand or with a foot-powered wood tub washer.

Excavations for the basement and foundation began on June 10, 1916, and the cornerstone was laid on July 16th of the same year. Work continued all summer into late fall with the farmers of the area hauling materials from Beardsley, eight miles away. They hauled eight railroad cars of red brick from the railroad siding. Many stories have been told of farmers leaving as early as 4:00 a.m. with their team and wagon to pick up brick, lumber, and other materials in Beardsley. The materials would be carefully loaded in the wagon, hauled to the church site, and then unloaded and stacked. Often it would take as long as four hours to make the full trip, where upon they could return home and begin their days work.

Many men helped during construction of the church which utilized their many skills whenever needed. The crew was kept supplied with materials at all times. Even during harvest, the farmers were willing to drop their work and haul supplies to keep the project going.

When the church was completed, it was 98 feet long and 45 feet wide with the tower reaching a height of 85 feet. Inside the tower, three bells were hung which weighed 1900, 1200, and 600 pounds. The church was built in the Roman architectural style, and no additions have ever been made to this original structure.

Mr. Josef Svoboda of Kewaunee, Wisconsin furnished the entire church in the spring of 1917. As an employee of Mr. Svoboda, Joseph Kanak was sent to Kansas to St. John’s Church to measure areas of the sanctuary they were to furnish. After going back to Wisconsin to help build the altars, Mr. Kanak came back to Kansas to help assemble them. During this time, he met a local young lady in the St. John’s area, Anna Faimon, and the two were married on

October 24, 1916. Jordan Hagler and Vince Kanak (mentioned later in this article) are descendants of Joe and Anna.

The high altar was purchased for the church by the Catholic Workman organization for $750. Joe Pochop, a parishioner of St. John’s, constructed the base on which it stands. The high altar was painted pure white and was richly decorated with gold leaf, and all the pillars were an onyx imitation. The two side altars corresponded to the high altar in all details, as did the pulpit, canopy, and sanctuary railing. The canopy was directly above the pulpit and worked like a sound system. The priest’s voice could be heard clearly while he spoke in a normal tone.

The windows throughout the church were made of art glass and were furnished by the St. Josef Art Glass Company of St. Joseph, Missouri. The twelve large windows were designed to represent full figures of saints. The small windows portray busts of saints, religious emblems, and artistic designs. Each window bears the name of the person or persons that donated that particular window.

In the early 1960’s, Mr. Alex Linenberger of Hays, an uncle of Fr. Virgil Kuhn (priest at St. John’s from 1941-1943), was hired to paint the three altars and the communion railing. They were painted eggshell and trimmed with 23 karat gold leaf. Light blue and rose colors were used to cover the reflective metal accents in the altars.

After Vatican II, many things changed in the celebration of the Catholic Mass. Frank Vrbas was asked to build the new altar of sacrifice and Wilfred Skolout painted it. Both were lifelong parishioners of St. John’s. It was first used on November 29, 1964, the first day that the priest faced the people during a Mass said entirely in English.

Now, over 100 years after Joseph Kanak came to Northwest Kansas from Wisconsin, to install the original altars in St. John’s, his great-grandson, Jordan Hagler, and his grandson, Vince Kanak, built a new altar of sacrifice for St. John’s as a larger altar was requested by a few priests. The original communion railing doors were used to build the new altar, featuring a lamb on one door and a pelican on the other. The lamb represents Jesus, the Lamb of God. The pelican is a symbol for Christ as the pelican was believed to have pecked her own flesh to feed her starving chicks. This is a symbol of Christ as he feeds us with his body and blood in the Eucharist.

The altar plan design concepts were created by Father Frank Coady. Vince Kanak took the designs and used them to draft blue prints for the construction of the altar.

Memorial donations were used to help with costs for this project in memory of: Ivan, Mary, and Lucille Sramek, John Burk, Kenny Wilkinson, Genevieve McKain, Rich and Mona Faimon, Gene Koons, Viola and Jerome Janousek, and Jim Sabatka. All were former parishioners of St. John’s.

Jordan is the great-grandson and Vince is the grandson of Joe and Rosie Janousek, lifelong parishioners of St. John’s. Rosie had a beautiful flower garden and decorated the altars at St. John’s with stunning flowers for Sunday morning Mass for many years throughout her lifetime. Joe and Rosie’s son, Jerome Janousek, was a carpenter and worked on several projects for St. John’s throughout his lifetime. Jordan and his wife, Andrea, and their son, Aidan, are parishioners at St. John’s.

Jordan stated, “I truly feel honored to be a part of this project. It was enjoyable working with my Uncle Vince as he is a master craftsman and comes from a long line of carpenters. It was a nostalgic feeling measuring the altars that my great-grandfather worked on and trying to replicate the work that he and his company created. I am amazed at the level of detail they achieved with the tools being used over 100 years ago. I think our ancestors would be proud of our work!”

Vince added, ‘I didn’t know exactly what Jordan, my nephew, had in mind when he asked me to help him out with building an altar for St. John’s.  I soon learned that we had two communion rail gates from the original work, and I thought that this ought to be interesting.  The project turned out to be a pleasure.  I enjoyed working along with Jordan, and there was additional significance knowing that my Grandfather and Jordan’s Great-Grandfather, Joe Kanak, Sr., had worked on the original altars and the interior of the church.  It is even possible that he might have put together the original gates that were incorporated in this altar.  It was a challenge replicating the work that was done so many years ago, and I sincerely hope that this altar will serve St. John’s Parish now and for many years to come.’