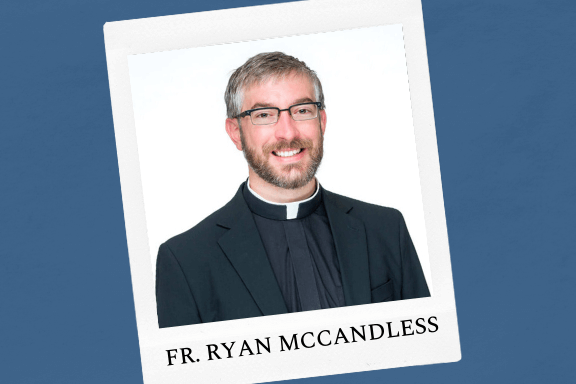 I was born in 1982 in Garden City. My parents are Rory and Teresa McCandless. My mom is from Garden City, KS and my dad is from Nyack, New York. They met in Salina where they were both going to college.

My dad converted after meeting my mother. My parents modeled marriage and the faith to me. I saw a great example of married life.

I have two older siblings, Kathryn (Katie) and Matthew. Katie was married and had no kids. She died in 2005. Matthew is married with 5 kids. I’m the fun father-uncle. So, they often call me fr-uncle.

I grew up in Garden City until I was seven. In my childhood imagination, Garden City is amazing and magical. I have a great love for the Garden City of my youth. The house, the backyard, the fruit trees – it reminds me of innocence and the mystery and order brought about in times of play.

In 1989, we moved to Wichita. It was scary, and a lot bigger than Garden City. But my little neighborhood quickly became magical, and the other neighbor kids became quick friends.

Growing up, I remember having a great love for the priests that were in my parishes. I never really thought about being a priest, but I always loved it when they were present at school. I always wanted to be a cowboy. I always liked drawing, but it wasn’t until high school I considered it as a career.

I went to Bishop Carroll and graduated in 2000. I sang in the choir, and I was part of the Madrigals. After high school, I would go to Wichita State University for one year, but then transferred to Kansas State University to dual major in Art Education and Bachelors of Fine Arts.

At KSU I dated a young lady who was presbyterian. We both loved the same type of music and would have great conversations about lyrics and share our faith with each other. One evening, I remember having a conversation with her about the real presence of the Eucharist. It was a good conversation about why we believed what we did. That night, I went to bed and prayed very casually, which is how I usually prayed. It was something like, “Hey God. What’s up? Today was a great day. I love this girl. I’m going to marry her.” And then I fell asleep.

30 minutes later, I woke up and started to cry. In that time, I had a dream. I was holding the Eucharist in elevation as at Mass, and I knew the Lord wanted me to be a priest. I told him I wanted to pursue the relationship, but that I would give whatever children we had to him. All of this took place December 8, 2000 – the Feast of the Immaculate Conception.

My girlfriend at the time later decided to enter RCIA at St. Isidore’s. I was her sponsor and got really involved. I also sang in the choir there. I began to learn so much about my faith. I thought I knew everything, but I was learning so much more.

My then girlfriend became Catholic, and we later became engaged. She went on for more schooling at KSU, and I continued pursuing a bachelor’s degree in fine arts and education. We were in new, different worlds. And as a result, we ended up breaking off our relationship.

And then, in 2005, my sister Katie died. Her death motivated me to hurry up and finish my degree. I ended up dropping the Art Ed degree and graduated with a BFA in Drawing in May of 2006.

Throughout high school and all during college, I had worked at Dillons, and I continued at Dillons after graduating. I wanted to go on for my masters, but oddly enough, the colleges always reported that there was an item missing from the application process or sent me items back. So, I continued to work for Dillons full-time.

When I started dating again, it was not a healthy relationship. Because of it, I began to turn to prayer more. I went to daily Mass for peace. I began praying the Rosary. The relationship was one of those where I felt like I was giving so much and receiving nothing, and so, I turned to God.

God was slowly pulling me back in.

In April 2009, on Good Friday, my then girlfriend and I went to the service. She wasn’t Catholic, but said she was interested, and she would keep asking me all these questions about why we were doing what we were doing. I gave her quick short answers.

Then we knelt in silence as the priest laid prostrate on the floor. Immediately I thought, “That could be me.” If I had gone to seminary right after high school, that would have been me. Overwhelmingly, I felt something in my soul; it should be me. I started to tear up, but I didn’t want my girlfriend to see, so I angled away from her. But for some reason, she leaned towards me and asked, “Why didn’t you become a Catholic priest?” That hit me even harder.

I bawled at the Easter Vigil. And on Easter Sunday, I told her I felt like I needed to go to seminary. I would email Father Keith Weber and ended my relationship with the girl.

When I discovered I was called to be a priest, I told God, “I see it.” But I chose something different. And even though I initially chose a different path, I invited God to still be a part of my life and come with me.

Through my vocation story, I really identify with Jonah in the Old Testament. God told Jonah to do something, and Jonah ran the other way. But God didn’t leave Jonah. He pulled him back. God waited to pull me back, nine years later, on Good Friday.

I received mercy from God. I learned how to pray, how to welcome the silence. I started to go to daily Mass and live the sacramental life in a way that allowed God to speak to me.

With the other Salina seminarians, I felt welcomed and accepted. They were my peers and offered a communal, fraternal life that I didn’t really have while I was in college. It was in seminary that I accepted the idea of me, Ryan, becoming a priest. It took a lot of chiseling away of expectations and ideals. I learned that I was supposed to walk with the people, have an incarnational theology, where they see in me, Christ in the midst. I am not meant to “fix” people because Christ “fixes” them. Me, I just walk.

The transition to priesthood was relatively easy. The greatest difficulty for me has been trying to be relevant in preaching. We are largely social media driven. At the same time, I want to preach about things to my local community, while also recognizing our global church family.

The greatest joy is seeing people light up when I’ve taught them something. That’s the teacher in me. I love the “a-ha” moments. I don’t want Scripture to be a novelty. I want to teach that Scripture is being played out, right in front of us.

This story is from the January 28, 2022 issue of The Register 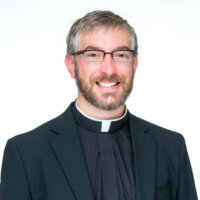