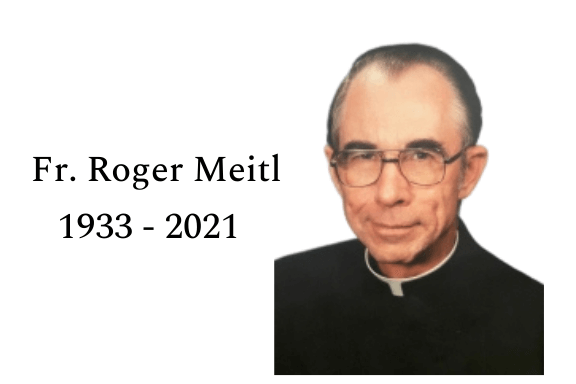 The Rev. Roger Meitl passed away peacefully on Friday, October 22, 2021 at the Catholic Care Center in Bel Aire, KS where he resided since 2014. He was born April 3, 1933 to John and Bertha (Ypma) Meitl in Leoville, KS and was baptized by the late Father Martin J. Schmitt.

Roger’s grade and high school education was received in the Leoville parochial schools in which the Sisters of the Congregation of St. Joseph of Concordia taught. He was encouraged to study for the priesthood in the Diocese of Salina by the Rt. Rev. Monsignor John Wolf and he began studies at Conception Seminary, Conception, MO, in September, 1951. There he followed the regimen of priesthood studies under the guidance of the Benedictine Fathers of Conception Abbey.

The last three years of his priestly training were spent at Kenrick Seminary, St. Louis, MO, where he was taught by the Vincentian Fathers. As a student of Kenrick Seminary, Roger continued his interest in choir and glee club work. He was secretary of the Kenrick Mission Society and took part in activities of the Rural Life Society.

After Roger’s ordination, he served in the following capacities:

Roger celebrated his 50th year Jubilee in 2009. After 53 years of service, he retired to the Catholic Care Center in Bel Aire, KS. Roger enjoyed traveling and was fortunate to travel internationally several times. He enjoyed researching the genealogy of the Ypma’s and Meitl’s. Roger was pre-deceased by his parents, his sisters, Genevieve (Meitl) Campbell, Sister John Bosco (Jackie (Meitl) Kenney), brothers Sylvester, Gerald, Elmer, Ernest and Walter. He is survived by one brother Harold and many nieces and nephews.

Visitation will be at Paul’s Funeral Home in Oberlin, KS starting at 4:00 p.m. followed by the Rosary at 7:00 p.m. Mass of Christian burial will be in Leoville, KS at the Immaculate Conception Church on Saturday, October 30, 2021 at 10:30 a.m. Roger will be laid to rest in the adjacent church cemetery next to his parents. Luncheon will follow in the Fellowship Hall at the church.

Memorials may be given to Immaculate Conception Church, Leoville, KS.