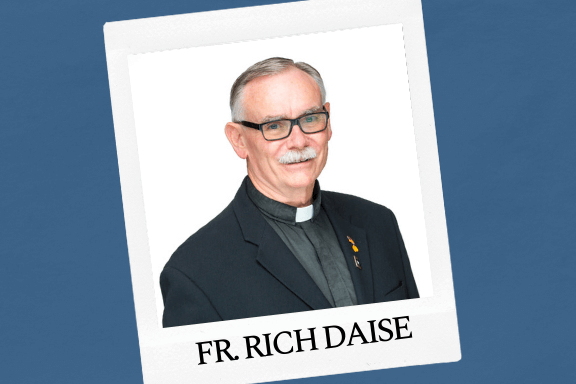 The Long Road to Priesthood

I was born on December 24, 1951, in Goodland. Mom always said it was the longest Christmas of her life. Mom was laying up in the hospital on Christmas day. She counted all the ceiling tiles, then all the holes in the ceiling tiles. And dad and my siblings were all at grandma’s playing card and drinking coffee. Finally, dad and my brother, Gene, came to the hospital. Gene was my godfather. He was home from the Navy. I was baptized on December 31, and Gene shipped out to Korea right after.

I am the product of very careful, natural family planning. My parents had four kids, and then they waited 20 years before having me to see what their mistakes were so they wouldn’t do them again! Mom used to tell me that if I had been the first, I would have been an only child.

My dad was farmer. He had grown up on the farm Granddad homesteaded in 1886. My folks were the first Catholic wedding in St. Francis in 1925. My parents lived in a basement about a half mile from my grandparents’ home. Their plan was to build a house on the basement. It never happened.

Dad had some health issues. He ended up taking a job out in Steamboat Springs, CO. Mom raised four kids during the 1930s. Eventually, in 1947, they were able to move into the original homestead house that my grandparents had lived in. I was closest in age to my sister, and she was 20 years older than me! I don’t think she ever thought I grew up. But I remember the transition when my older brothers started talking to me about things.

My brother Ted died in a boating accident when I was six. This was 1958. He was in the Navy, stationed in Florida. They just called my mom on the phone and asked if she was the mother of Ted Daise. She said “yes,” and they said, “Well, he died.” A very poor way to notify the family of the death of a service member.

That was the first time I ever saw my mom cry. We went out to tell my dad. It was amazing to watch them. Dad stood there with his head down and braced himself on the tractor. They were very matter of fact. The funeral was in Florida, and I was unable to go. After a long 40 years, I finally was able to go and visit my brother’s grave.

When I decided to go to seminary, I wrote Gene and Bob a letter. It said, “I think I’ll go to seminary.” Gene and I would talk about things, but Bob and I never did. I didn’t know if he would approve. But I was home, and I stopped into his office to see him, and all the ladies started to congratulate me. And I looked at Bob, and he was just beaming. And I knew he was okay with it.

I went to a one-room schoolhouse for grade school. There were six of us that started first grade together. We were the largest class! I went to high school in Goodland. I participated in football, wrestling and track. My junior year, I was in the school play. I had 3 roles! Two of them were corpses. I was also very involved in Future Farmers of America (FFA) and 4-H. I really liked 4-H and participated in several projects.

The year I had my first Reconciliation and First Communion, Mom took me on a trip to New Mexico to see my cousins. So, I received my Sacraments on Wednesday before the rest of the class received the following weekend. That day, every one else was in jeans, but I was in a coat and tie. I remember everything about my First Communion.

Up until the 8th grade, I was serious about the priesthood. But I didn’t think about the priesthood in high school. I did think about going to the Naval Academy in Annapolis. I didn’t think I could go because I thought you had to be a perfect physical specimen with straight As. I had glasses and was a solid B student. But after meeting a few guys from Annapolis, I figured out real quick that wasn’t the case!
After I gave up on Annapolis, 4-H came out with a veterinary science project. I dove into it. I even had a business card, and I wrote DVM after my name. The vice-principal told me I was a little optimistic. I never got the chance to tell him it came true.

I went to Kansas State University for vet school. This was during the Vietnam Conflict, and I was Number 2 in the Lottery. But I was in ROTC, so I was part of the reserves and was able to finish school and get my veterinarian degree. I owed the Army two years. The plan was to do two years and then get out. But the Army kept offering me good deals. I tell people I was drafted and forgot to get out. I was in the Army for 28 years.

Most of what I did in the Army was preventative medicine. Not only for animals, (dogs and horses) but also for human health for zoonotic diseases. I also did food inspection. I really enjoyed it. I actually got my master’s degree in food science and technology. We also did food plant inspections for sanitation, methodology and management practices.

I retired from the Army on April 1, 2004. I guess it was effective because no one said April Fools! After I got out, I had a job with an Army Contractor on a team of active and retired military. We did training exercises and seminars. I learned a lot of things that I probably should have known while I was on active duty. But eventually, the military split up our team. And that’s when it happened.

I had never quit Church. A lot of people in my generation did, but I never did. A lot of people asked me if I had ever thought about the priesthood. I talked with Bishop Fitzsimmons and told him I was interested, but I needed a couple of years to get things in order. By that time, Bishop Coakley was in Salina. He took me on and sent me to Blessed John XXIII National Seminary outside of Boston.

My favorite classes were Church history. I’m a history buff. We had to do a report, and I did mine on Father Emil Kapaun. I used to visit Pilsen, Father Kapuan’s home, twice a year. I think he’s the one who kicked me in the pants to become a priest. I wonder if I’m one of his miracles because he influenced my faith. I was asked to send my story to Rome as part of his cause for sainthood. I admired him because we had a lot of parallels – Kansas farm boys, Army, Catholic and service in Korea.

My least favorite class was philosophy. There were only three in the class who understood it. I felt sorry for the professor. He was trying to explain it, and we just didn’t get it. One day he yelled, “It’s not rocket science, guys!” And one of my classmates, who was a retired NASA engineer said, “I wish it was! Because maybe I’d understand it!”

I was ordained on May 22, 2010. People from all over the world came. It was a good day. The Mass of Thanksgiving was in Goodland. The Mass and the sacraments are the best part of the job. I like funerals. You get to know people at funerals. And at funerals, people don’t come in with ideas about the funeral that they have planned for years (as weddings sometimes are). At a funeral, they just want you to help them.

For those considering the priesthood. I’d say give it a try. The first response is, “I’m not worthy.” You’re right. None of us are. But the good Lord needs someone to do it. He doesn’t call the qualified. He qualifies the called. I’m impressed with the men who are willing to try. 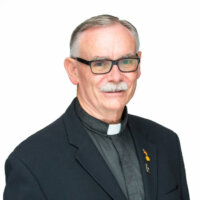