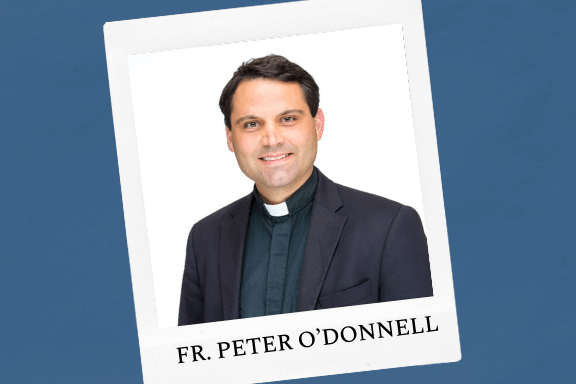 I was born in Corpus Christi, Texas in 1983.  My parents both went to Kansas State University. Then, my dad got a job at a bakery in Texas. That’s why we were there. They always had the intention of moving back to Kansas, and they did when I was eight. My younger sister was three at the time. I really liked south Texas, so it was a little hard moving. We moved to Manhattan, and I attended Manhattan Catholic Schools from third to eighth grade. And then I went to Manhattan High School.

I was pretty quiet growing up. I played basketball through eighth grade, and then just for fun after that. I played the trumpet from fifth to twelfth grade, including marching band in high school. I always saw myself as a parish priest if I’m being honest. My parents modeled the faith for me. We went to daily Mass and prayed a daily family Rosary. I saw the Church as a second home, so I was naturally drawn to discerning if I was called to be a priest.

There was only one other occupation I considered. I used to draw maps for fun. And I was always the navigator on family vacations, even at the age of nine. So, I considered some type of occupation related to city planning or cartography. But I never pursued it.

I started looking at seminaries in high school. I never really broadcasted that I was looking. My parents were always really supportive of me pursuing the priesthood. Occasionally, I’d get some unexpected comments from others who said they could see me being a priest. Others didn’t understand. But rather than being discouraged, I wanted to give it a shot. It intrigued me that people had those uncertain types of perceptions.

I was eighteen when I entered seminary. Bishop George Fitzsimmons accepted me into the program. I spent four years at Conception Seminary College in Missouri (2001-05), and five years at St. John Vianney Seminary in Denver (2005-10). I liked Scripture classes, both in college and theology. But I perceived most of my classes as something to get through. They were a means to an end to become a parish priest. I didn’t enjoy them, but they weren’t terrible. I got good grades. But my heart was with the people in the parishes.

As a seminarian, I had a summer assignment that was beneficial to me. Back in 2003, I did a youth program. It was a precursor to Totus Tuus but was set up the same. I liked being present in various parishes. You get to know families and get a good sense of what the Salina Diocese is like. That summer really helped renew my calling. I had doubts about whether to go back, and that summer answered those doubts for me. I still wasn’t for sure if I would be a priest, but it helped me take the next step.

I thought I knew I was going to be a priest, but then I realized I really didn’t. I had a lot of uncertainty through seminary, but each year, I believed I was meant to continue in that place. It’s strange because it’s not a cut and dry deal. I wasn’t 100% certain, but at the same time, I wasn’t going around with no direction.

I was ordained a priest on May 22, 2010 by Bishop Paul Coakley. Father Rich Daise was also ordained. It was a good day. I remember there were a lot of people in the Cathedral. I remember how it felt laying on the floor listening to the Litany of the Saints. I remember when the priests processed through and welcomed me. I remember during the ritual of the ordination, that I immediately felt connected with all the priests.

My first assignment was at St. Mary Queen of the Universe in Salina. I was with Father Kerry Ninemire. The biggest struggle with that assignment was teaching the sophomores, two hours a day for two years. I struggled with that because I knew the subject matter, but I didn’t know the art of teaching. And the world had changed since I was in high school. Cellphones were all of a sudden more common. It was a challenge to navigate the duties of teaching and school chaplain ministry, but it all worked out. Otherwise, I felt really blessed to be a priest; I still do. Every year, I enjoy it more. I learn more about what I’m doing. There’s a lot of consolation in the calling. I have no regrets or doubts. Each parish assignment brings many challenges and joys.

In January 2014, I started online canon law school. I volunteered for it. I saw a need for a priest to assist in the Tribunal. One day, I was praying, and I sensed that God was asking me to be open. I talked to Bishop Edward Weisenburger. He was open to it, too. I did online school from 2014-16, and then I moved to Ottawa, Canada for school for fourteen months. I completed my license in June 2017. It was hard leaving the parishes to go to school. Canada was more difficult than I thought it would be. Looking back, I’m happy I did it. Now, I assist in the Tribunal on nullity cases, which is about 80% of the work. It’s writing sentences, interviewing, following up with people – as part of the Tribunal team. I also organize the diocesan archives and assist the bishop on various canonical tasks and projects.

It can be disheartening working on nullity cases. It is a real blessing to be in a position to minister to the couples where they are. I try to remember those who have gone through a divorce when I celebrate Mass. I think it is part of my job, part of my calling, to bring those who are divorced closer to the Lord. There is a chance for a new beginning after a divorce. As a priest, it’s important to balance, manage time and prioritize. In high school, I worked two years at Taco Bell. Fast food provided me helpful time management skills! I think there are two challenging things as a priest. I’ve moved many times in my first ten years, so there is a lack of stability. The other is navigating a support network in the midst of expectations of parish priesthood. I have to balance being a father and being a friend. I also didn’t realize how difficult it can be for priestly fraternity to be consistent. Even though I feel connected, the priesthood can be isolating. One challenge I faced in seminary was following the 2002 priest scandals that came out my freshman year. I could sense that the perception of priesthood was changing and becoming more controversial or more of a target for people’s hatred and anger. So, I think what happened for me is that I chose to lean into the calling rather than run away, hoping to find redemption, to be part of the priesthood of Jesus Christ, and to bring hope to people. That has been my desire.

So, my advice to someone considering the priesthood, don’t let the pressure from society prevent you from seeing the real opportunity that is present and available to bring hope, truth, and new life. With priesthood, I went from being such a quiet kid, to someone not afraid to preach, someone who enjoys visiting classrooms or going to a football game and saying hello to parishioners. Priesthood brought a new zeal, a strengthening of confidence and less fear over time. For some priests, their stories are that they mature and then they join seminary. For me, I had some growing up to do during seminary and during my first few years as a priest.