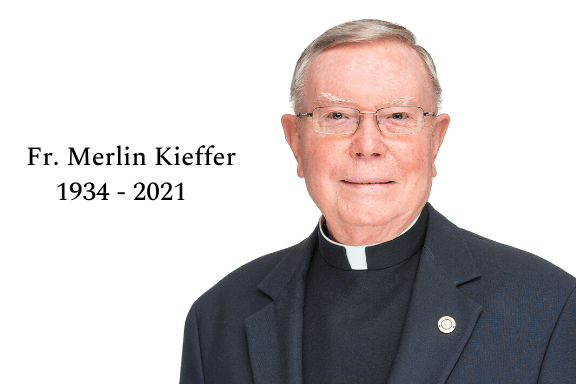 Father Kieffer was the second youngest of six children born to Peter and Anna Kieffer. He attended a country school until 1945 when his family moved to a farm near Hanover. He finished grade school at St. John’s in Hanover. He then attended high school at St. Francis Seminary in Victoria and was part of the first graduating class.

Upon graduating, he went for an additional eight years of college and theology at both St. Gregory and Mount St. Mary’s of the West in Cincinnati, Ohio. He received his Master’s in philosophy.

On May 26, 1960, he was ordained a priest for the Diocese of Salina in his home parish of St. John the Baptist in Hanover.

Following ordination, he did graduate work in counseling psychology for four summers at Catholic University in Washington, D.C. and was the guidance counselor and instructor in Latin and Church History at the Catholic high school in Concordia (1960-1963) and Manhattan (1963-1971). While teaching at Luckey High School in Manhattan, he served as the associate pastor at Seven Dolors. In addition, he became the administrator of St. Patrick Parish in Ogden in 1964, and the administrator of St. Joseph Parish in McDowell in 1966.

In 1971, he concluded his time in the Manhattan area and moved out west. He was named the pastor of Our Lady of Perpetual Help Parish in Goodland. He served there for nine years.

In 1980, he was called back to the heart of the diocese and took on the role of Director of Education and Superintendent of Catholic Schools. He remained in this role for five years. Also, during this time, he was pastor of St. Patrick Parish in Gypsum for one year, and pastor of St. Bernard Parish in Ellsworth for three years.

From 1984-87, he served as pastor of St. John the Baptist Parish in Beloit. as well as provided pastoral supervision to the K-12 Catholic schools. In 1985, he was also named the pastor of Ss. Peter and Paul Parish in Cawker City and St. Mary Parish in Glasco.

In 1987, he returned to Salina for one year as the rector of Sacred Heart Cathedral before taking a one-year sabbatical.

During his sabbatical, he spent the fall semester as a graduate student at Notre Dame in a special renewal program of theology, Scripture and spirituality. He then traveled to Ein Karim, Israel with theology students from St. John’s University, Collegeville, Minnesota to study Scripture, Biblical archeology and geography. During this time, he traveled through Israel, Egypt, Greece and the Sinai Peninsula.

After returning to the United States in 1989, he was assigned to St. Francis Cabrini Parish in Hoxie and St. Martin Parish in Seguin. He served there until July 2000.

Due to health complications, he retired in July 2005 and took up residence in Manhattan while providing pastoral assistance to Seven Dolors Parish.