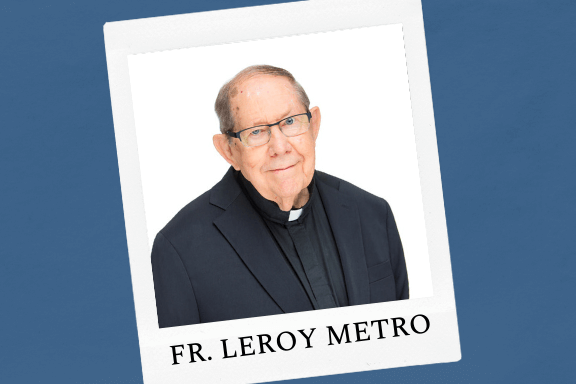 From family to family

Well, I was born on St. Patrick’s Day in 1937. I was the oldest of six kids born to John and Lillie Metro. We lived in Concordia, but my parents were from Aurora. I was baptized there in Aurora on St. Benedict’s Day—March 21, 1937. My dad worked for the railroad, and my mom mostly stayed at home as I grew up.

Both of my parents were Catholic, and they came from a good line of Catholics before them. We are French Canadian. It was my great grandparents that moved down to Kansas from Canada. I often had the chance to talk to my grandparents when I was a child. I remember my grandma telling me about the saint in our family. St. André Bessette was canonized in 2010, but his holy witness was noticed long before. He is a distant cousin on my dad’s side of the family!

Because of the faith in our family, it may not be a surprise that I went to the Catholic grade school in Concordia. Inspiration from family stories, those of St. André and the daily environment of faith at the school prepared me to listen to God.

It was at my first Holy Communion in second grade that I first felt a desire for the priesthood. Over the next couple of years, that feeling continued in my heart. I started to attend daily Mass, and I either served or sang in the choir. In the seventh and eighth grade, I was the trainer for Mass servers.

There was a time around fourth grade when our class had the chance to talk to the pastor of the parish. That conversation also got me thinking about seminary and the priesthood.

I told my parents about this feeling and desire almost right away. They were understanding, but they did not take to the idea very good. My mom was pretty concerned. She thought that I might be too young to know what God is asking of me. At this time, my mom only had me and two of my younger siblings, so the thought of me going to the seminary was a thought of her loosing half of her kids.

It is true that I was too young for seminary then—I mean I was only in the fourth grade! Yet, that sense of God’s call never left me as I finished grade school. By the end of eighth grade, I knew I wanted to go to the seminary. I was 13 years old, and my younger brother was 8. My youngest siblings were not born yet. With trust in me and faith in God, my parents supported me going to high school seminary in Victoria, and that is what I did.

It was scary going to high school seminary. I was pretty nervous when I first moved in. Not only was there some uncertainty in my parents’ hearts, but there was some uncertainty in mine, too! I was leaving my family. However, the friars and other students in Victoria became a second family for me. The seniors were especially helpful for the freshman like me. Those were some good years!

We did a lot of normal high school things and had some good fun inside and out of the classroom, but what sticks with me even today is the spirit of family. There is a lot of growth for kids in high school, and that seminary became the family I grew up with even though my own family was growing back home.

When it was time to move on to college seminary at Conception, Missouri, I was getting excited! This was a difficult transition because it was farther away from home, and I was not able to see my family as often. My family had just made the move to Salina. My dad was the custodian for the Cathedral and the former Sacred Heart Grade school. He took pride in his work and parish. Mom managed and cooked at the
grade school cafeteria. She was known for her wonderful cinnamon rolls. Both served for over 20 years.

School was my least favorite part of college seminary. I was good with languages and enjoyed reading, but math and science were never a strong point of mine. In college seminary, the students study mostly normal courses. I had to take the same general education classes as anyone would have. I was really looking forward to theology! I was excited to get away from the numbers.

When I entered theology, I found great joy in school. The mysteries of the faith, the prayer of the liturgies and the excitement of the Second Vatican Council continued to encourage me in formation. School was tough, but I was still listening to God. By this point in seminary, I knew what God was asking of me. I spent 8 years at Conception—four in college and four in theology, and God continued to guide me through all of it.

There was great joy in my heart when I graduated and prepared for ordination on June 1, 1963. In 1962, the diocese ordained five guys to the priesthood, but I was in a class by myself that year. I remember the powerful moment of prayer as I laid face down on the floor in our Cathedral during the rite of ordination.

There was an impactful sense of brotherhood when all the priests of the diocese laid their hands on my head after the bishop. I had left my family in Concordia at 13 years old, found a second family in Victoria and Conception, and was then welcomed into the brotherhood of Christ’s eternal priesthood in Salina. That is a day I will never forget.

I have had the joy of being a priest for 58 years now. I have been a pastor, a vocations director, a chaplain at Marymount College and a spiritual director for many souls. My greatest joy has come from being with the people in our diocese. I love the liturgy—especially the Holy Mass, but outside of that, my favorite sacrament is reconciliation. I have loved being a priest.

My advice to young people discerning God’s call for them today is to relax! First of all, relax with it. God has plans for people, and sometimes that plan might change because of things we do or don’t do, but just relax because you can get so caught up by thinking and trying to make a decision. Looking back on my call, I did not think about it too much. I listened and I acted. So, just relax and listen!