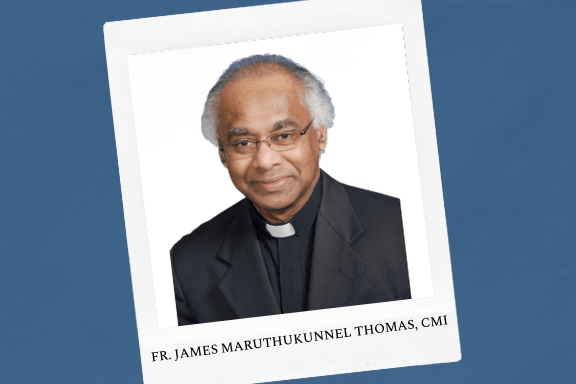 I was born on July 5, 1950, in Kerala, India. My parents were farmers, and I was the oldest of six. We were Catholics. Traditionally, as far as I know, my great-grandparents on both sides were both Catholic.

When I was in grade school, most of the neighborhood was all Hindus. There was only one other Catholic family.

We had two types of farming, perennial and annual crops. Our perennial crops were coconut, rubber trees, coffee, tea, cardamom, pepper jack fruits, mangoes and some other spices like cloves. Our annual crops were rice, ginger, turmeric, banana and some other tubers. But the bananas in India are different than the kind we get here. We had a number of varieties of bananas and mangoes. We had so many fruits.

I was hardly 16 when I began to think about being a priest. The reason I chose the Carmelites is because of my neighbors. The lady over there had a brother who was a Carmelite priest. Whenever he visited, he encouraged me and asked if I would join.

My grandmother was not very happy. She knew that the Carmelites lived very poor and simple lives with frugal food. She preferred that if I be a priest, I become a diocesan priest!

Since I was in a religious order, I entered the novitiate after learning Latin and Syriac. Most of these two languages, I forgot by this time. It was a period of training that we undergo before taking the religious vows. Then I went to the major seminary where we learned philosophy and theology along with many other topics relevant for priestly ministry.

Before I could do philosophy, I needed to have a bachelor’s degree. So, I went and got a degree in Chemistry.

I was ordained a priest in December 1977.

After my ordination, I was sent to do post-graduate work in Chemistry. As a religious priest, it is not necessarily required that you do parish ministry. We live in a community. Since I was good at studies and loved Chemistry, I was sent to do that.  I scored in the high first class.

The following year after post-grad, I was assigned as a lecturer in Chemistry at college. It was a government job. This college was managed by our congregation. I taught for 26 years. I also got registered for a part-time research program with a nearby School of Medicine in Bio-Chemistry and took my PhD. Along with that, in 1994, I became the Principal (President) of the college for nearly 12 years. Once I became an administrative head, I no longer had to teach the whole time. I probably only taught one or two hours a week, and it was theory classes.

When I turned 55, I had to retire according to the government rules. And then, Bishop Coakley needed a priest. Father Michael Elanjimattathil, CMI was already here, so that’s how I came here.

I had never flown before. I had never even gone outside of India. But I was not nervous to come here.

Of course, there are many differences between India and Kansas. But because I had been the President of the college, I had experiences with all kinds of people from other countries. Plus, we only spoke English in college, so I did not have too many problems with English.

The only problem was the accent. We learned British English and then for us, it becomes British-Indian English, but here, it is American English. You can understand the difficulty.

I came to the Salina Diocese in 2008. I was first in Oakley and Angelus as an associate, then in Seven Dolors in Manhattan. In 2009, I was appointed to Grainfield, Park and Grinnell, where I am to this day.

I give importance to all aspects of being priest. Sacraments are the number one priority, especially the Eucharist and Confession. It is important to give reflections during Confession. I enjoy preaching, and I enjoy the people. And I like giving homilies.

I don’t find anything which is exceptionally difficult… sometimes, very small number of people don’t like me/you. You cannot please everyone. But it is okay.

I still like teaching. See, I can watch the kids of the parish, and I encourage them, especially when they are little, to be in touch with serving at Mass. I give them the sacraments. But I watch them to see which ones grasp it. And then I hope to encourage them to consider the priesthood.

Right now, there are two men from this parish who are discerning the priesthood. Out of the 6 seminarians, we have 33%! It makes me very happy to see their vocations. I am happy to be there if they need me.

This story is from the February 25, 2022 issue of The Register