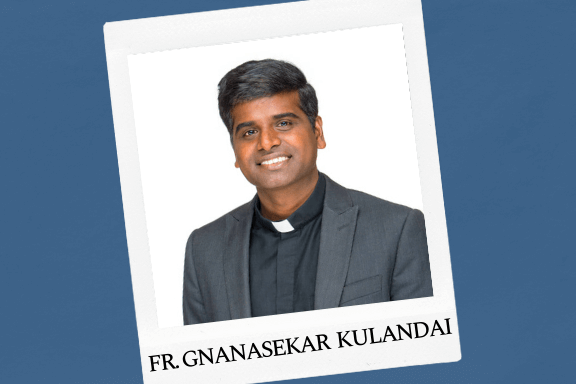 A change in country, but not in my religion

I grew up in a village in India. We lived about ten kilometers from the big city. I was the youngest of five children. It was nice being the baby of the family! My dad was a farmer. We grew rice, vegetables and flowers. We would have to get up early in the mornings and collect everything to take to market.

My family are all devout Catholics. I do not know for how many generations we are Catholic, but we are Catholic for as far back as I can remember. Most of India (80%) is Hindu, only about 2.3% of the country is Christian, in which 1.5% is Catholic. My Catholic faith made me distinct, but it didn’t harm my friendships or relationships with people. My best childhood friend was a Hindu. In our simple home, we didn’t worry about differences in faith. There was unity in the diversity.

My greatest role models were my parents. They cultivated my faith and conscience, but so did the priests and religious sisters at the Catholic school I attended. There was one teacher who made a tremendous impact on me. He was very quiet and never used corporal punishment. Corporal punishment was allowed back in those days. Just his stern look would calm us. It inspired me and taught me that we should do our jobs with love.

When I was in grade school, and people asked me what I wanted to be when I grew up, I said a priest! But then when I was older, sometime after the 5th grade, my answer would vary from police officer to engineer to doctor to farmer. I had many different desires. There were other parts of the world I wanted to explore. I was always comfortable with those dreams, but I wasn’t fully satisfied. I was aiming for everything, but I felt like I was neglecting the most important call. One of my sisters is a religious sister for the Sisters of Good News. When I was in 10th grade, she came home for a visit. We talked for about 30 minutes and she expressed to me her vocation and the way God calls. We talked about the mission of priests. I knew then that I was hiding from the priesthood. So, when I was 16, I decided to enter the seminary. It was kind of funny, but my cousin, who I am very close with, entered seminary at the same time that I did. We went through everything together. It was very comforting.

When I told my family about my decision, my mom and siblings were extremely happy. My dad was sad. He wanted me to be close to him. He knew that I would not be home very often, and that was hard for him. He died before I was ordained a priest, but I know that he was proud of me. The first four years of seminary were not easy. I was not yet sure that the priesthood is where I was being called. I could foresee the challenges, like being far from home. I also knew that I would have to give up my desires for a family.

There were always questions, but less with each year. Around year five, I knew without any doubt that God wanted me to be a priest. I came to realize that God’s will for me is better than my desires. God wants what is best for me. Something I like to reflect on that one of my formators shared with me is, “The Will of God will not lead you where the grace of God cannot keep you.”

I was ordained as a priest for the Heralds of Good News (HGN) on February 3, 2009. The HGNs are a clerical missionary society that seek to train saintly, hardworking, dedicated missionaries and supply them wherever there is a need. I chose them mainly because my sister’s order was founded by the same priest. I did not know very much about the mission congregation when I joined, but I knew I would be sent out.

After I was ordained, my first assignment was to teach philosophy at the seminary. I did that for four years. Near the end of my term, Bishop Weisenburger contacted my superiors in need of two priests. My superiors came to me and all I could say is, “Yes, I will go.”

I strongly believe that God speaks through the superiors. God sends us to the right place. So, he sent me and Father Soosai Rathinam, HGN to Salina. We did not know where Kansas was.

I remember flying into Kansas City, and Father Leo Blasi picked us up at the airport. He was a seminarian at the time. He drove us to Salina. I looked out the car window the whole time and couldn’t believe it. There were no people and no honking! India is the second most densely populated country in the world, so the space out here was hard to believe. We stopped for lunch, and I had no idea what to order! The food is very different here.

My first assignment was in Hays. Father Kevin Weber was my mentor. He was great and did not grow tired of me. While I had already been a priest for four years, I had never served at a parish. Serving at Immaculate Heart of Mary in Hays was my first time ministering to the people.

One of the hardest things for me when I got here was cooking! In India, the women do most of the cooking. It’s the way of the culture. So, the only thing I knew how to do was boil water. On my first day in Hays, Father Kevin gave me some cash and went to his farm for his day off.  I went to buy groceries at Dillon’s. I did not know what to buy! I walked up and down the aisles for a long time. Thankfully, a very nice woman from the parish saw me and helped me out.

I have loved being in the Salina Diocese. And I love being a priest – it is a special call. The best part of being a priest is bringing God’s love to people and watching them come alive. Recently, I visited a man who had strayed from the faith for most of his life. After hearing his Confession, seeing the joy in him was priceless. What else is there?

I am happy here, but I do miss my home and my family. It’s strange, but I’ve never been assigned to a place where I could speak and celebrate Mass in my mother tongue, Tamil.

I know that God wanted me to be a priest. I remember one time when I was young, I was walking in the field, and I heard my name being called. I looked all around and ran home, wondering who had called me. No one had. Sometimes I wonder if it was God – similar to the way he called Samuel. I think everything circles back to how God calls. Once I knew I was being called to the priesthood, I never regretted it. God continues to keep me safe, happy and joyful.

I am greatly indebted to the Bishop, priests and people of the Salina Diocese for the love, friendship and support I receive, and to Heralds of Good News for the formation and mission I cherish. 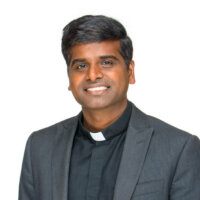