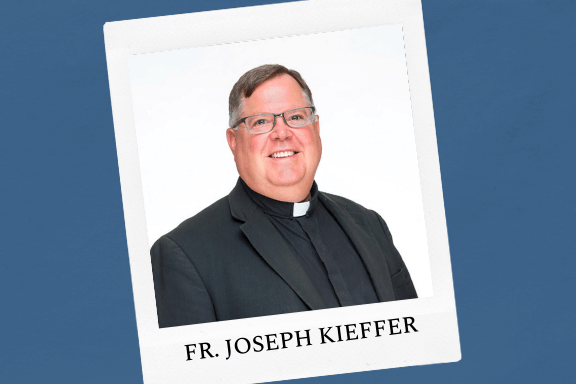 I was born in Hanover in 1963. I had a good family, very faithful to church. My mom and dad, Alvin and Dolores Kieffer, always got us to church early to pray, and we were usually the last family to leave after Mass. They encouraged us at home about learning our faith.

We were a farm family. Mom was always busy taking care of us kids, and we all helped on the farm. I fed the cows and pigs, as well as worked in the field. When it was harvest, I drove the truck because I wasn’t comfortable on the combine.

I’m the eighth child of ten. There were five boys and five girls. I didn’t really know the oldest five that well They were pretty much out of the house before I was old enough to know them. I did have a sister named Teresa. She died in 1970 when I was eight from a heart condition. We were in the process of moving from Hanover to Clifton when she died.

We continued to farm while in Clifton. I went to Clifton grade school. I got along with my classmates and liked school for the most part. Some subjects were hard for me. I went to Clifton high school, and between my sophomore and junior year, Clifton and Clyde consolidated, and so I completed my high school education at Clifton-Clyde which was in Clyde.

I really liked my vocal and band teacher, Mr. Copeland. I didn’t start out wanting to be in band, but he pulled me aside and said he needed a trombone player. So, I switched from science to band, and I also sang in the choir. He was my inspiration in wanting to be a music teacher.

During a CYO event Father Vincent Lemoine encouraged me to think about the priesthood. I enjoyed going to church because I got to sing. As I got older I was able to sing in the choir.  My parents encouraged me and my younger brother to be altar servers. I enjoyed doing this.

The thought of becoming a priest didn’t cross my mind when I was in school. The late Father Merlin Kieffer was my uncle, and I don’t remember him encouraging me to go, but I’m sure in some small way he was an influence. My oldest brother, Michael, went to seminary high school and a couple years of college, but he didn’t complete his education. He dropped out and went to Vietnam since he figured he would get drafted. I never really thought about the priesthood seriously until after college.

I went to Cloud County Community College and got an associates degree in music. I then transferred to Bethany College. They had a good music program and good scholarships. My intention was to pursue a degree as a music teacher, but after a year of student teaching, I changed my mind. I didn’t know if I could handle that or put a lesson plan together every day. (But, here I am now, teaching in essence!)

After college, I moved to Manhattan and worked in various jobs. During that time, there was a vocations program, “Called by name.” People were asked to submit names to the vocations office of men they thought would be good candidates for the priesthood.

My name was turned in two or three years in a row. Father Keith Weber was the vocations director. We had several good visits, but I didn’t think priesthood was where I was being called.

I worked at Seven Dolors Church in Manhattan as the music director for a couple of years and then as bookkeeper. A lady came into the office while I was working. And her question to me wasn’t, “Have you thought about priesthood?” Instead, she said, “When are you going to become a priest?” When she left, Sr. Joan Wolf, who was on staff, pulled me aside and said that my face lit up when she said that to me. That triggered in me the thought that I needed to start thinking more seriously about priesthood. So I began to pray about it.

Father David Metz was the vocations director at the time. He had me go to a meeting with Bishop George Fitzsimmons and other potential seminarians. Father Peter O’Donnell was one of them.

I decided to apply, went through the process, and in the fall of 1999, I was in my first year of seminary.

I enjoyed seminary and the comradery. I was still able to be involved in music as a cantor. I was not a fan of my philosophy classes. Bishop George told me he understood that since I was a business person, the abstract would be difficult for me.

I didn’t really have a favorite class, I enjoyed most of them. I was learning so much about my faith. I thought I knew a lot about my faith until I went to seminary. Studies were never easy for me. Thanks to God’s help I got passing grades.

Yes, there were times in seminary I had doubts. But I turned to prayer and asked God to guide me. It seemed like those doubts feel away. I talked to the professors who told me it wasn’t unusual to have some doubts. I also prayed to my sister Teresa to help me. I felt that she helped me to keep moving forwarding in my studies and in my discernment process.

By God’s grace I was ordained May 29, 2004. I was nervous. All my family was there, as well as a number of people from Seven Dolors. I was Bishop George’s last ordination. Honestly, it was a blur. I remember he cracked a joke while I was kneeling in front of him as we waited for the musicians to finish their song. It was all I could do not to laugh.

The transition from being a seminarian to becoming a priest wasn’t too rough. They do warn you that not everything will be how you studied it. My first experience of, “they never taught us this” was at Immaculate Heart of Mary in Hays. Father Kevin Weber was away on vacation and there was a huge storm. We had three inches of rain in an hour. The maintenance guy needed help. And I was in the storm with him trying to bucket water away from the school so it wouldn’t get inside. I had to throw my shoes away after that storm.

Some of the challenges of being a priest are being caught up in arguments between individuals or groups of people when you are trying to keep the peace. Or the sadness when someone leaves the Church because of something you did or didn’t do or say. I’ve been a priest for 17 years. I’ve gotten a little bit of a thicker skin, but sometimes, I still take things personally.

But the greatest blessing of being a priest are the people. I’ve been able to share in their joys and sorrows, and make many friends along the way.

I think for those considering the priesthood, never say never. You do not know how God will call you. Just be open to the call and take the leap of faith, and enter seminary just to see. I do remember when Father Lemoine asked me about the priesthood, he didn’t push. He just gently encouraged. I appreciated that. 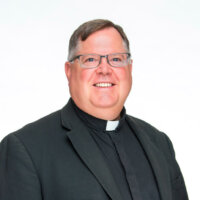