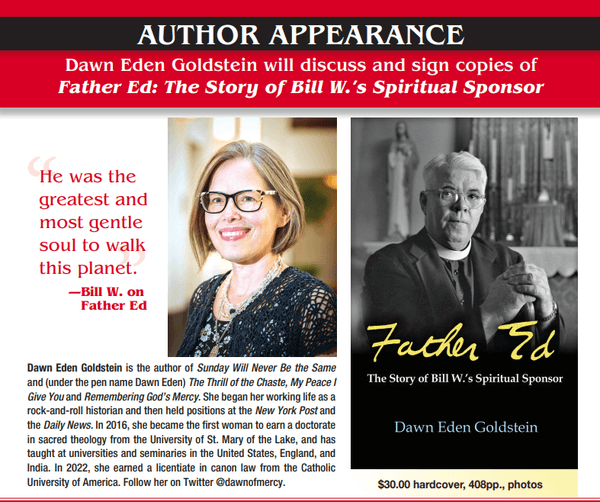 We are excited to announce that Dawn Eden Goldstein will be coming to Immaculate Heart of Mary Parish on Sunday, February 5th, a 3:00 p.m.! She will be speaking about her new book, “Fr. Ed: The story of Bill W.’s Spiritual Sponsor.” This will be a great opportunity to hear about the life of a highly influential priest – one whose life and work has the ability to enlighten and inspire all!

There is no cost to attend; a free-will offering will be collected at the end. All are invited to attend. Books will be available for purchase and for signing. Please come if you are able! God bless!

Dawn Eden Goldstein was a rock and roll historian in New York City before becoming the author of several books on Catholic spirituality and personal conversion, including The Thrill of the Chaste and My Peace I Give You: Healing Sexual Wounds with the Help of the Saints. She received her doctorate in sacred theology summa cum laude from the University of St. Mary of the Lake in 2016–the first woman in the university’s history to earn a canonical doctorate. She has taught at universities and Catholic seminaries in the United States, England, and India, and is currently completing a licentiate in canon law at the Catholic University of America.

Alcoholics Anonymous co-founder Bill Wilson called Father Edward Dowling, SJ, “the greatest and most gentle soul to walk this planet.” Father Ed’s guidance transformed Bill’s life and deepened the spirituality of the twelve-step movement. But despite his vital role in A.A. history, his own story has never been told–until now. Dawn Eden Goldstein, author of the new biography Father Ed, will share about the life and message of this remarkable Jesuit who, although not an alcoholic himself, came to devote his ministry to helping people in recovery and anyone else who had a problem.